With the arrival of Season of Plunder, the new Eruption mode has found its way to Iron Banner, putting a twist on the standard Clash deathmatch rules, with Guardians on kill streaks gaining even more points and ability energy but risking losing it all if they can’t maintain their momentum. 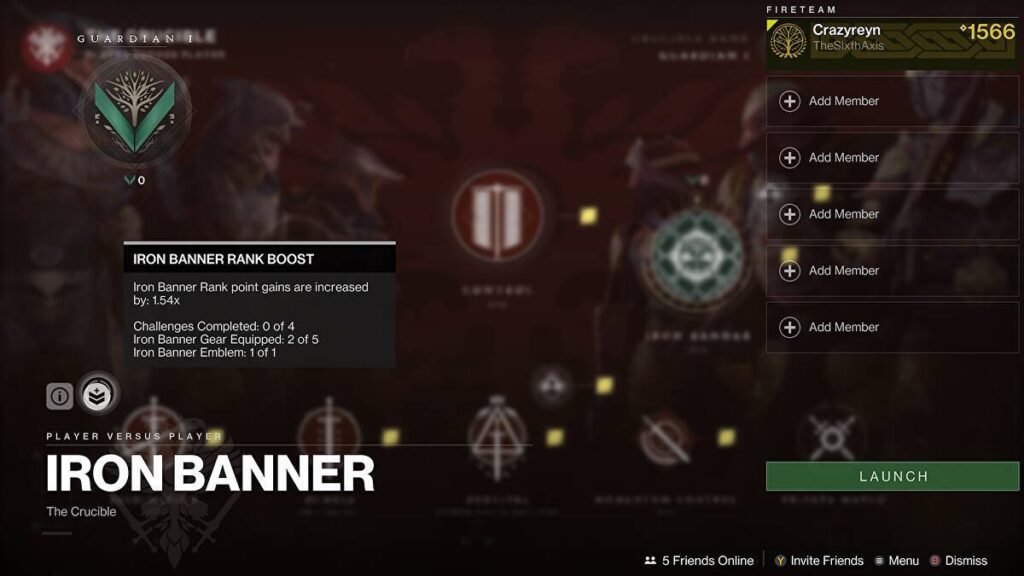 Open the Destinations page, pick The Crucible, and then hover your mouse over the Iron Banner activity node to see what your current Iron Banner daily challenge is.

You’ll automatically receive a new Iron Banner daily challenge with the daily reset during the first four days of an Iron Banner event, which is Tuesday through Friday. Confusingly, they are labeled as ‘Weekly’ tasks and don’t expire until the end of the Iron Banner event on the following Tuesday.

You must accomplish an increasing number of Iron Banner matches for the current Destiny 2 Season 18 Iron Banner event, but happily progress rolls over from challenge to challenge, so you’ll only need to finish 18 matches in all.

It’s also worth noting that the Iron Banner daily challenges, prizes, and Forging Iron quest are character-based rather than account-based. That is, finishing a challenge on one character will not complete it on your other characters, but you will still receive Pinnacle awards and other benefits for doing so.

After completing a daily challenge as part of the Forging Iron Iron Banner introductory quest, you’ll receive your rewards: a Pinnacle Iron Banner loot drop, which will help you hit this season’s power cap of 1580, and a 100% increase to your Iron Banner Rank gains.

Each challenge grants this bonus, and there will be four daily challenges per character at every Iron Banner event, thus completing all of them will significantly improve your rank increases. Check up with Saladin at the Tower to get gifts and Iron Banner Engrams as you go – for Season of Plunder, you can obtain the replayed Roar of the Bear Rocket Launcher and Allied Demand Sidearm.

Increase your Iron Banner Rank by wearing up to 5 pieces of Iron Banner gear (any Iron Banner weapon or armor) and wearing any Iron Banner insignia. The armor may alternatively be used as the item itself or as a decoration. Wearing Iron Banner armor with another Iron Banner ornament on top counts as two pieces of gear, so you won’t need to wear a complete set of armor to receive the maximum rank bonus.

While you try to win Destiny 2 Iron Banner Daily Challenges, you can also get a lot of loot in the new Season of Plunder. Make sure you understand how to obtain Destiny 2 Map Fragments and Treasure Coordinates in order to create Treasure Maps for loot, and you should collect those Destiny 2 Cryptic Quatrains in order to unveil items in a complex treasure hunt.

In addition to completing the Forging Iron quest phase, completing Daily Challenges can improve your rank bonus throughout the event.

You may check your current boost based on many criteria, including how many Daily Challenges you have accomplished if you pick Iron Banner and hover over the Rank Boost node in the bottom right.

If you’re serious about ranking up during Iron Banner – which is even more vital given that it only occurs for two weeks every season – having as many ranks boost active as possible is a must.