Altar of Flame is located at the Caloris Basin from Mercury. And the terrains for this crucible map are the Sloped, flat, steppes. Play the survival mode to explore more about this intriguing map. As already told this new Altar of Flame in Destiny 2 map is from the Mercury region of the game. A huge map which all the guardians of D2 can explore for various challenges and quests. As players can play the Survival mode on this map, here are some strategies and guide to play on this map.

Though the guardians can also play on the Clash and Control modes, yet the best set of challenges for the Altar of Flame map can only be experienced through the game’s Survival mode for all the D2 fans.

More on Altar of Flame Map in Destiny 2 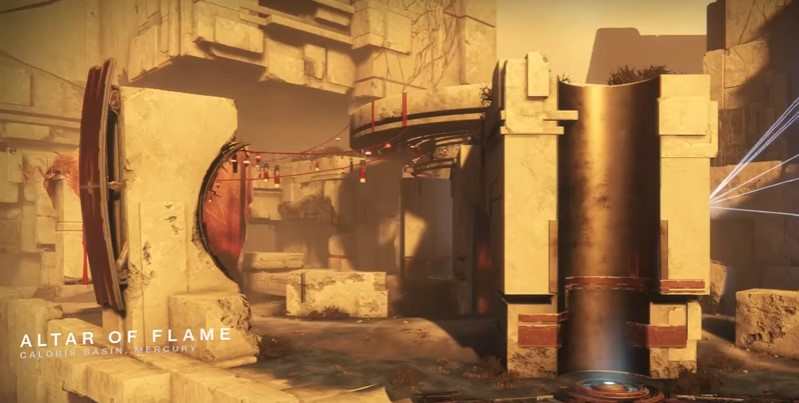 Apart from the missions, quests and challenges from the Altar of Flame map of Destiny 2, there are some exotic and beautiful locations at this mercury map region, here are they.

Candles – a tiny place from the mercury region, this part of mercury can also lead to the other major areas in the game.

Circuit – you can enter from the corridor or even from the candles flanking route. Small battles occur here at this circuit spot region often

Dunes – this has been the most busiest place of mercury which is full of high voltage action fights , you can also acquire many weapons from this place and also along with the Power Ammo

Hall, Shrine, Gate and Blocks are the other major localities from the mercury map region on Destiny 2.

What Kind of Game is Destiny 2?

Destiny 2 is an online multiplayer first person shooter game which is full of action and battles. The game was launched by the developers Bungie from 2017. The characters or heroes of the game are known as the guardians in Destiny 2.

Destiny 2 has been successfully running as the game is set to cross season 18 soon. Destiny 2 season 19 is all set to commence very sooner. Play Destiny 2 for its incredible gameplay, features, characters, weapons and the explosive guns too.