7 Best Armors to Use in God of War Ragnarok

Kratos is going to need the finest armor in the North if he’s going to take down these legendary beasts and deities. Lucky for you, we’ve put together this list of the 7 best armors in God of War Ragnarok.

The sets below make up a varied mix of armors that suit a variety of playstyles. Whether you’re a battlefield tactician who likes to outplay their foes, a hot-headed brawler who runs headlong into battle, or love the power trip of being absolutely invincible to enemy attacks, you’ll find the perfect set for your playstyle here.

And if you have yet to get the game, quit your waiting, grab some PSN Gift Cards from OffGamers here and get it today! Now let’s get into the article. 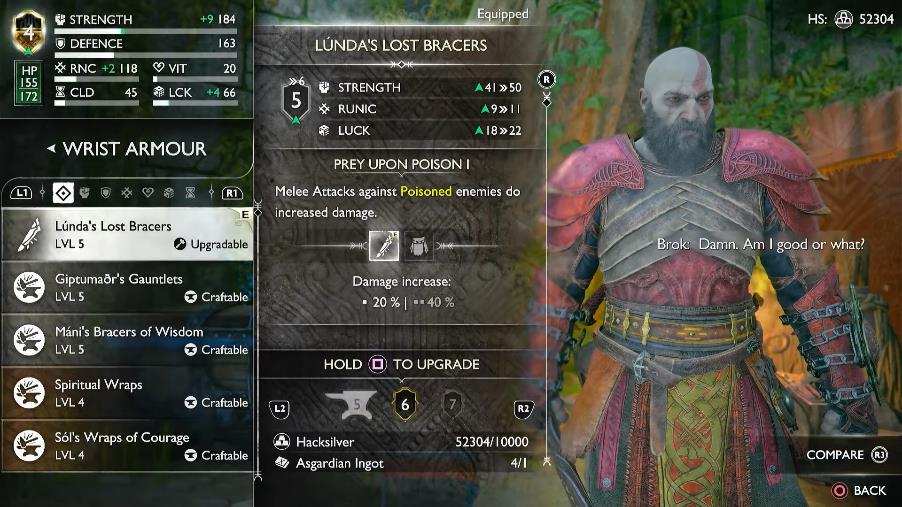 Also known as the “poisonous” armor set, Lunda’s Lost Armor lets you make short work of even the toughest enemies. Poison lowers the level of enemies. This means they have weaker stats, so your attacks hit harder and enemies deal less damage.

The chest piece grants the Vanir Poison skill, which adds a high chance to deal bonus damage and poison to Kratos’ bare-handed attacks. This effect synergizes perfectly with the gauntlets and belt, which together give you a whopping 40% boost to melee damage dealt to poisoned enemies!

The biggest drawback of this armor set is the setup required to exploit its full effect. Vanir Poison isn’t guaranteed to trigger after a strike, so you’ll have to rein in any full-on combos until an enemy is poisoned. This means battles start off slow, especially in the late game, when Lunda’s mediocre stats really become obvious.

Lunda’s Armor set rewards players who prefer a more patient style of play. If you’re consistent and play it safe, the set’s combination of poison damage and melee damage boosts lets you walk through all of God of War Ragnarok with little issue. 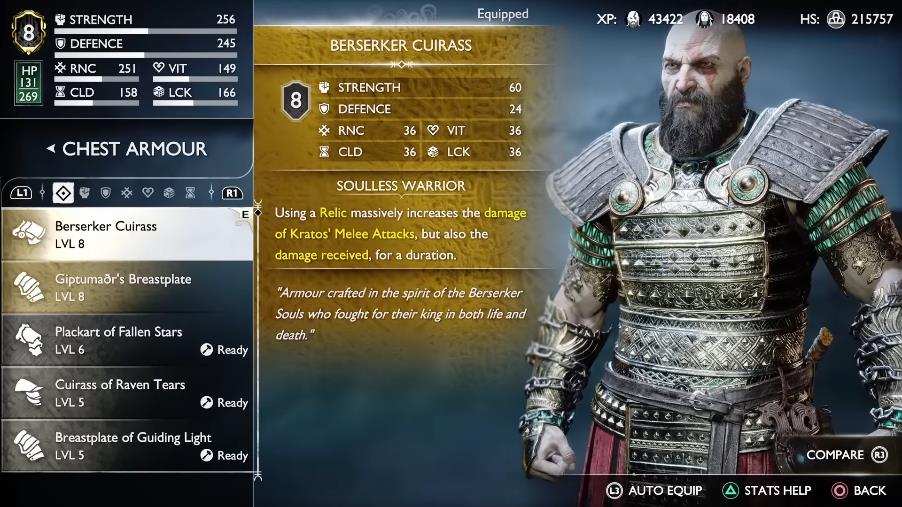 This mid-late game armor set is perfect for you tacticians, who like to take advantage of Kratos’ full moveset. The Berserker Armor set revolves around taking advantage of Soul Explosions to control the flow of battle.

With the right Relic, Kratos can easily lay waste to groups of enemies, thanks to Soulless Rebuke. This skill gives you a chance to cause a Soul Explosion every time you take damage, block, or parry. It also reduces the cooldown of your Relic every time it triggers. If you find yourself in a tight spot, Soulless Rebuke will damage your attacker, giving you a short window to get out of dodge and reposition.

Equipping the Berserker Gauntlets adds a low chance to trigger a Soul Explosion every time you successfully hit an enemy. You can maximize the odds of triggering Soul Explosions by equipping the Blades of Chaos, allowing you to easily kite and take down groups.

The Berserker Cuirass grants Soulless Warrior, which is a high-risk, high-reward skill that’s ideal for highly skilled players. Every time you use a Relic, Kratos gets a huge damage increase to his melee attacks but also takes more damage, too. If you’re a master of movement, blocking, and parrying, you’ll be able to easily crush any foe in your way. 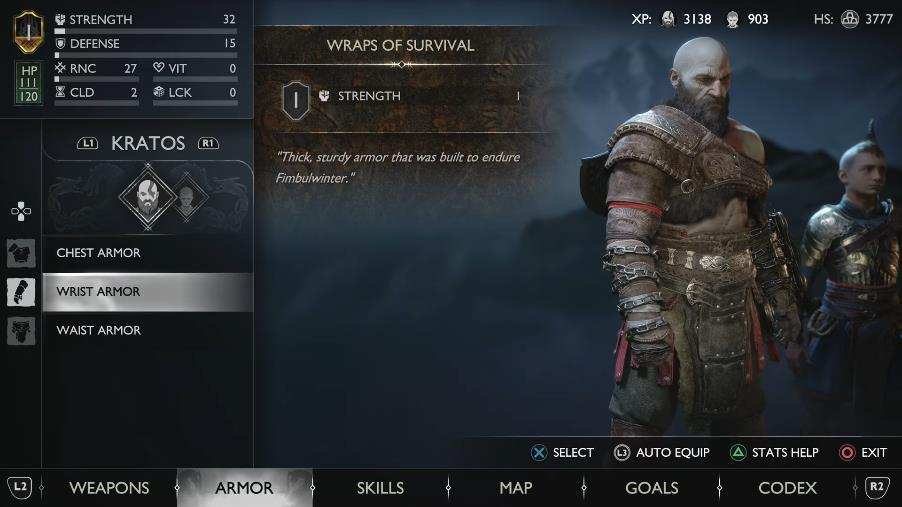 Shockingly, one of the best armor sets in God of War Ragnarok is the one you start with.

If you’re like most players, you swapped out the Survival Armor the moment you could. Why wouldn’t you? The Survival Armor has terrible stats and gives Kratos no skills or effects. Stick with it, though, and you’ll find it scales to the late game better than any other set in the game.

The reason Survival Armor is so great later in the game is that, with upgrades, it offers massive gains to every single one of your stats. With the full set equipped at max level, Kratos gets a crazy 153 buff to his Strength and Defense and 108 points to Runic, Luck, Vitality, and Cooldown. No other armor set in the game comes close to offering those kinds of gains!

Be ready to grind to fully upgrade each of the set’s pieces. It’s well worth the work—with the full stats boosts, Kratos absolutely melts anything in his path. In fact, maxed-out Survival Armor’s stats are so insane that you can play as recklessly as you want with little consequence, making it the armor set of choice if you really want to feel like a god of war.

Surtr’s Scorched Set is the ideal kit if you have an aggressive playstyle. The full set gives huge bonuses to Kratos’ Strength, Defense, and Vitality, with some powerful skills to boot.

The full set synergizes to reward players who like to go all-out with their offensive combos. The chest piece gives Kratos the Preemptive Strike skill, which grants a huge damage bonus every time you hit an enemy while they’re attacking. You’ll want to constantly be on the front foot, one eye always watching for opportunities to counter enemy strikes.

Naturally, that extreme aggression is going to put you in a lot of dicey positions. So, it’s a good thing that the Scorched set also gives you Aggressor’s Resolve. This skill lowers enemy damage by up to 40% and gives Kratos added stagger resistance when he’s attacking.

With the Scorched Armor set equipped, you can go wild with your melee strikes. The more aggressive, the better, because you deal the most damage when you’re constantly attacking. 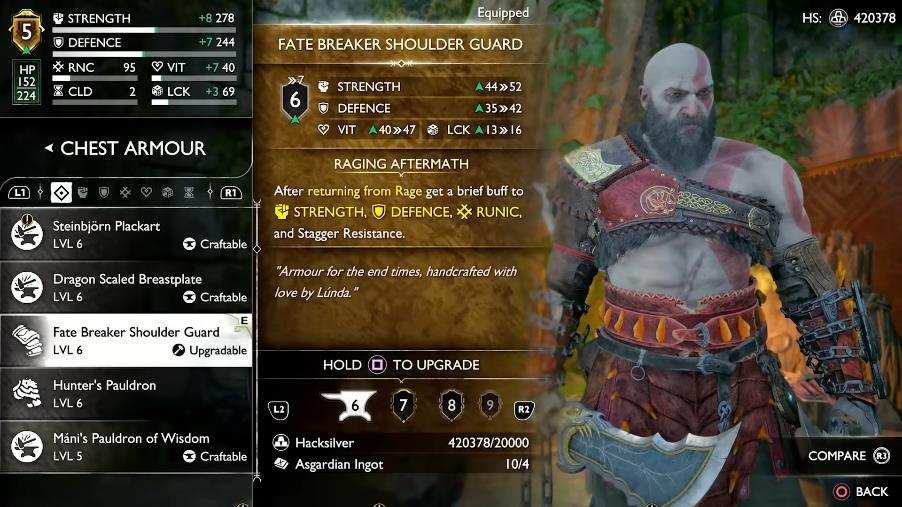 The Steinbjorn Armor is made for the gamer who wants to feel like a walking tank. With the fully upgraded set equipped, you get a ridiculous 394 points to your Defense stat. Forget about dealing status effects or insane damage boosts, with the Steinbjorn set equipped, enemies and bosses will bounce off Kratos like drops of water.

We’re not exaggerating when we say you’re practically invincible with the Steinbjorn armor on. Not only does Kratos get the huge Defense boost we mentioned earlier, but this set also lets him automatically restore health after taking major damage and even leech health with his attacks.

The big downside to the Steinbjorn set is that it doesn’t help you deal damage at all. In the later stages of the game, when enemies are hard-skinned and have large health pools, you’ll wish you had a set with a bit more oomph. If you’re the patient, risk-averse type, Steinbjorn is the set for you. 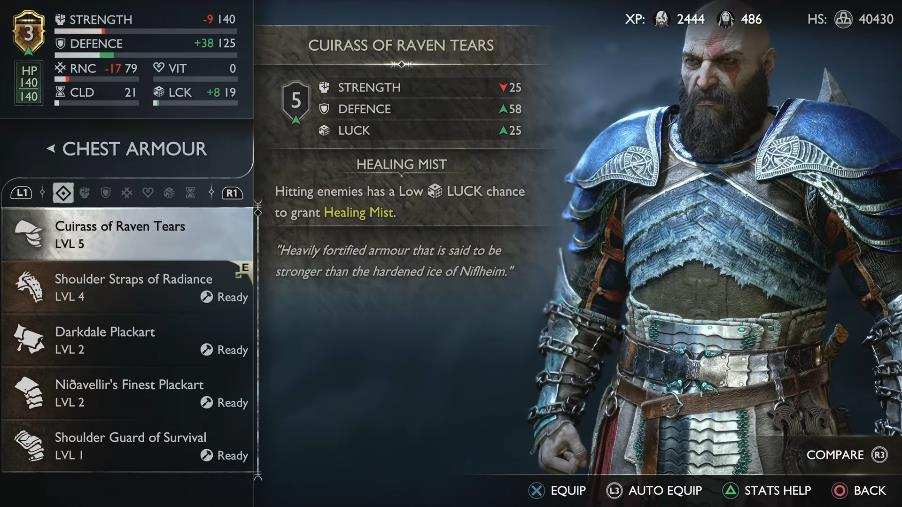 While this end game armor set doesn’t have the most impressive stats, it’s designed to provide constant healing in battle. With clever movement and smart timing, the Raven Tears set makes Kratos nearly impossible to kill. Players with a defensive play style will get the most benefit from this set.

The Cuirass of Raven Tears gives Kratos a small chance of summoning a Healing Mist every time he attacks an enemy. This promotes some aggression by allowing you to heal up with every strike. If you time your blocks and parries correctly, the Healing Mist procs will keep your health points topped up throughout combat. And in situations where you’re a bit low on health, you always have an opportunity to bring it back up with a few well-timed strikes.

Both the Braces of Raven Tears and the Girdle of Raven Tears boost the healing effects Kratos gets from healthstones, ragestones, and gear. For less skilled players, these effects help them stay alive in even the most dire of situations.

Seasoned action game vets won’t like the lack of damage-dealing effects the Raven Tears sets offer, but for those who just want to survive (and aren’t averse to heavy item usage), this armor set is guaranteed to keep you from eating dirt. 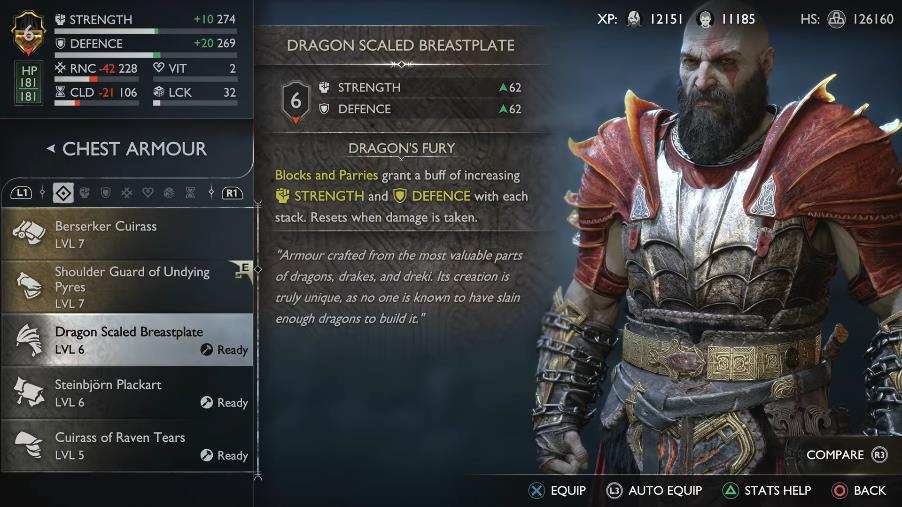 Compared to other late-game armor sets, the Dragon Scaled Armor is probably the least balanced, stats-wise. While it gives Kratos an impressive 200-point boost to both his Strength and Defense, it doesn’t offer much to his other stats. It makes up for that by giving you one of the God of War Ragnarok’s best skills: Dragon’s Fury.

Dragon’s Fury comes with the Dragon Scaled Breastplate. This skill raises your Strength and Defense every time you block or parry. The effect stacks, too, allowing you to become insanely powerful and tanky if your defence game is on point. The buffs disappear the moment you get hit, though, so this skill is really only recommended for the most skilled God of War players.

The set also grants Dragon’s Rebuke, which boosts your Shield Damage with each successful shield block, up to a maximum of 50%. Again, players who are technically very good at the game will reap the most benefits from these skills.

Those were our picks for the 7 best armors to use in God of War Ragnarok. Some are made for damage-dealing, some are impenetrable suits of metal, and others still give Kratos some incredible skills that make him a powerhouse in combat. You probably won’t have the time to collect them all, so pick one that best suits your playstyle!