The Dune of Elusion Fire Totems Genshin Impact: All 4 Locations!

Everyone wants to know about the fire totems, If you have trouble locating the location of The Dune of Elusion Fire totems Genshin Impact, so don’t worry in this post you will get to know the location.

All Location Of The Dune of Elusion Fire totems Genshin Impact:- 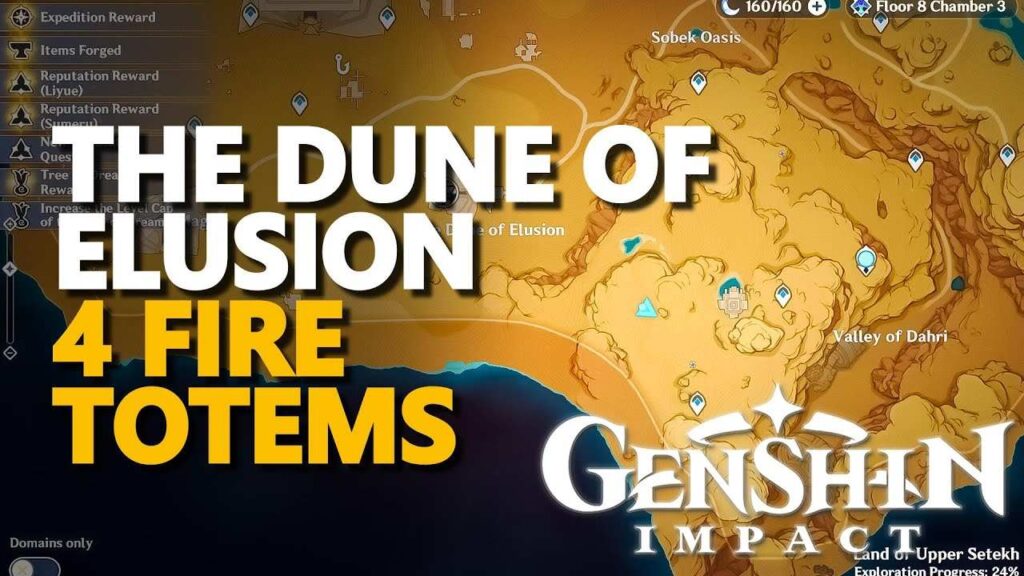 2) In a building that the Dual Evidence quest can visit.

3) To eliminate the obstruction obscuring the Dendroculus, ignite all Pyro torches located south of A Dune of Elusion.

4) Solve every mystery in the ruin complex south of Dune of Elusion. The reward for finishing it is the Dendroculus. To achieve this, we will require complete authorization.

A Dune of Elusion pyramids is located southeast of the King Deshret Mausoleum in the Hypostyle Desert. In this place, a teleport waypoint could be unlocked. This Old Notes & New Friends’ Dual Evidence quest is necessary for several of the puzzles found around the pyramid. To achieve complete clearance, we advise beginning the quest chain first.

All of the fresh stuff that has been introduced to the game is already known to you if you have been investigating the new version. There was already a tonne of quests available, but now there are even more for those that have previously finished them or are seeking something else. In Genshin Impact, there seem to be a lot more puzzles that must be solved in order to fully explore an area. Let’s look at how to solve a Dune of Carouses Dendro Rock Totem Puzzle, of them.

How To Complete Dune of Carouses Dendro Rock Totem Puzzle:

We must visit the Dune of Carousel in the Sumeru Desert’s new region in order to solve this puzzle. This area has an oasis, a little island, and a lot of adversaries. You can spot it simply because it is on the southeast side of the dunes.

When we arrive, we’ll need to call in some Dendrogranas to clear the dirt from the area surrounding the Oasis. We will need to figure out this piece of the puzzle. To get rid of the dirt heaps after triggering the Dendrograna, we must hit them.

There really are 3 of these mounds, therefore we will need to repeat this process three times. Underneath are totems that will spawn with a few foes. These adversaries also require three tries of the clearing. After that, hit the totems to activate them by calling the green Dendrogranas in the center. A Dune of Carouses Dendro Rock Totem Puzzle will then be complete, which will open a chest.

This is it we know about The Dune of Elusion Fire totems Genshin Impact, if we get updates on this topic we will make another post about this topic, just stay with us for more interesting content and if you like our post then please follow Gaming Acharya and tell us in which topic you want us to see in our site.