How To Hit Opponent While Sliding: Fortnite Chapter 3 Season 4!

How to hit opponent while sliding, the Weekly Quest is here and we want to know how to complete the challenges in Fortnite chapter 3 season 4. The game’s brand-new sliding movement element debuted at the beginning of Fortnite Chapter 3 Season 1. It can be used by players to quickly descend hills and, to that extent, to avoid gunfire.

The player will receive 20,000 XP for doing the task. This article will walk you through the process of how to hit opponents while sliding on Fortnite Chapter 3 Season 4.

Know More About How To Hit Opponent While Sliding:-

In Fortnite, sliding around is always a smart move, especially if you ever need to conserve energy and prevent using up all of your sprints to get away from the edge of the Storm. Your slide now has more of a kick for Chapter 3 Season 4, enabling you to knock your opponent away. What you should know about a Slide in Fortnite Chapter 3, Season 4 is as follows.

Make sure your character is sprinting when you wish to slide, then press the Crouch button halfway through the sprint. Your character will squat low to the ground & start sliding when you crouch. They may go very quickly when traveling down a hill.

Until you stop moving or the momentum stops allowing your character to move forward, the slide will continue. You can continue moving forward in a full sprint after you finish dashing because dashing doesn’t use any of your sprint energy. Below you will learn how to hit opponent while sliding in Fortnite chapter 3 season 4.

A Detailed Tutorial On How To Hit Opponent While Sliding:- 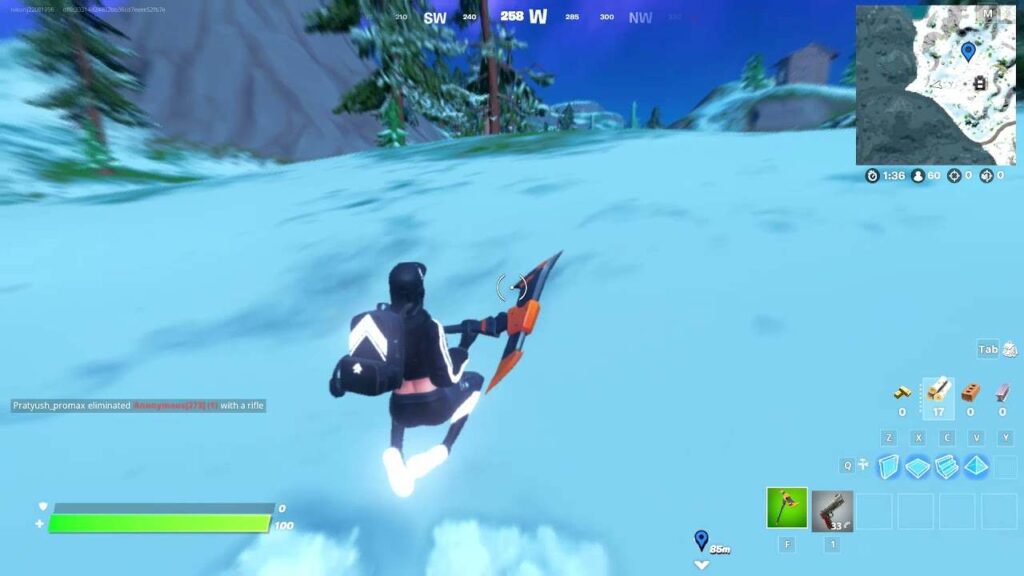 1) Players can hit opponents in one of two ways when sliding.

Sliding while shooting sounds like a lot more fun, and that is certainly the case as seen in many Fortnite teasers and videos. The game’s physics allows players to accelerate significantly when sliding down steep terrain. Let’s see how to hit opponent while sliding down the hill.

Locate a high point and look around for potential enemies. When they are within striking distance, move to the edge of a high area and start a downward slide. Aiming down sights may be required, depending on how close the target is. Before stopping the slide and turning to safety, fire a brief burst.

This increase in speed is quite helpful when you need to move swiftly or avoid oncoming fire. Given that persistent slides frequently continue for a long time, shooting at opponents is best done with an AR or DMR.

2) The second way how to hit opponent while sliding is given below.

Get as close as you can to the target. Start a slide and move toward the goal in the selected direction. To deliver damage, use close-range weapons like shotguns and SMGs. Cancel the slide & rotate to safety after a few shots have indeed been made.

Sliding quickly is a big tactical advantage in battle royale like Apex Legends or Call of Duty: Warzone. Players are given more control, and it also aids in aim. A similar approach can be used when playing Fortnite. There is a catch, though. Short spurts of sliding are considerably different from sliding downhill at full speed. Players cannot anticipate achieving 100 in a few seconds.

On the other hand, kids will have considerably better control over their direction and movement. The player won’t be dragged downward for just a wild ride because this is done on a reasonably flat surface. The steps needed to finish the challenge to use this strategy are listed below.

Please Note This Before Learning How To Hit Opponent While Sliding:-

It won’t be feasible to aim all ten shots simultaneously due to the pace of the slide. Therefore, it’s preferable to score a few goals before turning to safety. Throughout the course of a match of Fortnite Chapter 3 Season 4, there will be numerous opportunities to use this technique.

Players can prevent the opposition from mounting a counterattack by canceling the slide and spinning. Although ARs can be employed, due to their rapid-fire, SMGs will work better in this situation.

Previous article
Purchase an item from Panther, Mancake or The Underwriter in Fortnite
Next article
How to Bust Through a Door at Cloudy Condos and No Sweat Insurance Fortnite Guide!