On smaller terrain, the Phantom is a superb choice, especially in the hands of a skilled sprayer. However, Phantom’s kills aren’t as rewarding as Vandal’s. Some skins’ one-taps are well worth the money because they bring something special to your greatest highlights.

What are the most costly Valorant Vandal skins?

The most costly Vandal skins in Valorant are Champions 2021 and Elder Flame.

The ultra-limited Elder Flame skin is a popular Vandal skin that cycles on the normal skin market. Among the many appealing aspects of this unusual skin are accentuated dragon scales and flaming movements. Even with the addition of numerous equally complicated skins, the Elderflame Vandal’s sound effects and distinctive feel remain unrivaled. It is one of the most expensive skins in the game, costing 2,475 VP for three versions and animations.

The “exclusive” family consists of five Valorant Vandal skins. This is Valorant’s second-highest tier, including some of the most costly packages. 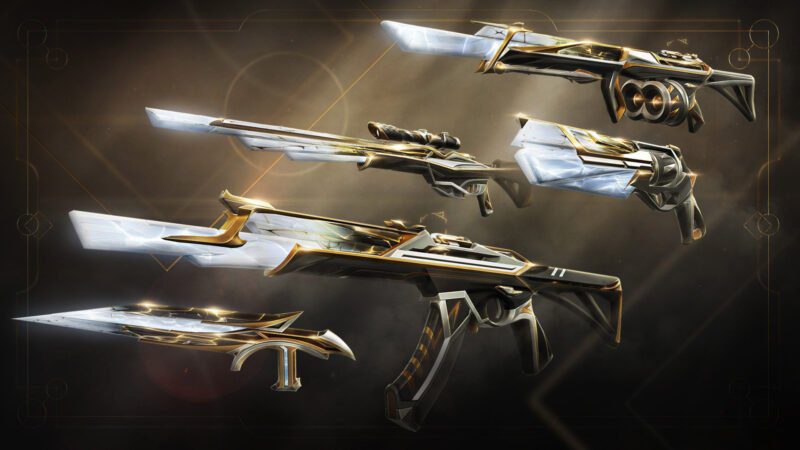 Glitchpop Vandal, the most popular skin in Valorant, is covered with colorful stickers and cyberpunk art. As its death animation, the vibrant Vandal releases unicorn showers over the sky. It comes in three flavors, each featuring rattling sound effects and fantastic animations.

It was introduced as a rival to the Ruination package, which represented the darker side, and was an homage to the Sentinels of Light event in LoL. With its variations, bespoke VFX, and finisher, the crystal-bodied Vandal remains a fan favorite.

Prelude to Chaos’ futuristic mix features city lights and spinning disco lights in an appealing color palette. The sound effects are extremely appealing, contributing to the over-the-top nature of this Vandal weapon skin. It’s available in green, white, and blue, with bespoke VFX and a finisher.

Those that brought it to the range, on the other hand, discovered that it adds a new sort of sound element. The RGX 11z Pro keeps track of kills through a small screen on its geometrical body. The three color options make the unique price tag worthwhile.

Riot introduced a limited edition package comprising a knife and Vandal to honor the VCT tournament that crowned the first-ever Valorant global champions in 2021. It is the rarest Valorant skin so far because it does not rotate in the shop.

Nonetheless, it’s an iconic statement skin, particularly the Red variety, which is ferocious and aggressive. The geometrical pattern adds a luxury touch to this skin by bringing life to the plain Vandal.

The weapon combines the swirls of Reaver with the royal flair of Sovereign. The Forsaken is only available in two color options and a dark finish.

Tree branches embracing a Gaia salmon gem make this skin different from the others in Valorant. It’s classic, immersive, and thematically rich. Gaia’s Vengeance interrupted the monotony of Riot’s futuristic skin designs in Valorant. This one-of-a-kind weapon is accompanied by an equally eye-catching finisher that places a massive tree on the battlefield.

Who doesn’t enjoy seeing little fish swim in an aquarium? Riot achieved exactly that with their Neptune collection. The Neptune Vandal is an ocean-themed weapon with a relaxing and colorful aquarium built into its body. To see this premium feature, gamers must first acquire levels.

These skins will not be available for purchase and are now only available in the inventory of individuals who have completed the related Battle Pass in Valorant Vandal skins.