Twitter has mistakenly believed that Fortnite’s chemical element Chrome was the web browser Google Chrome’s Collab with the battle royale game. However many Fortnite gamers have cleared the air that’s a total misinterpretation between Twitter and Fortnite community. 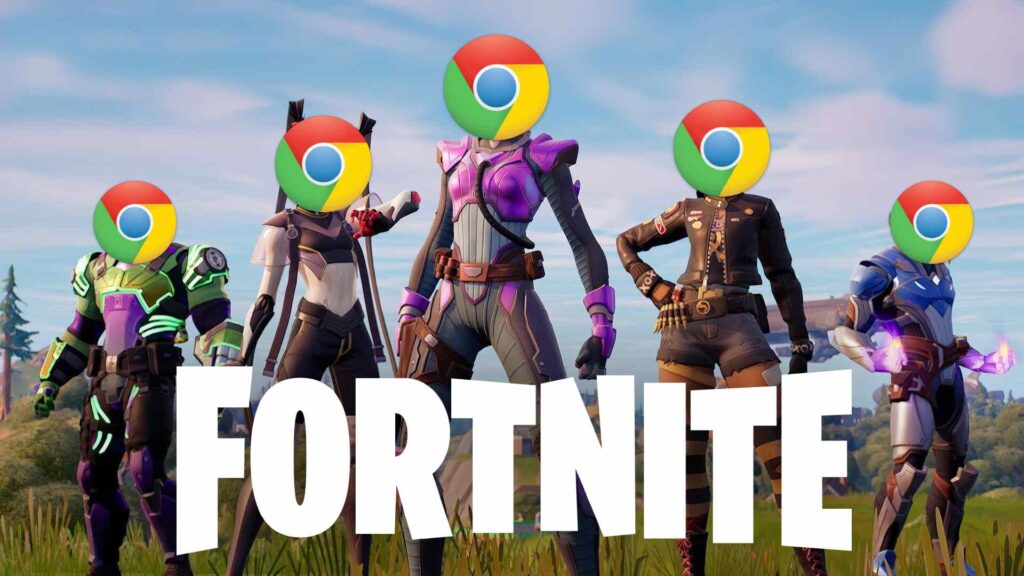 Twitter trends have shown a tweet from the Fortnite handle stating that Fortnite x Google Chrome collab is happening, as the letter C in the capital has made them all believe that it’s actually a Collab between Google Chrome and Fortnite, but the thing is, it’s not.

Yes, Fortnite is definitely not in the idea of a collab with Google Chrome, what’s interesting is that some of the Twitter Fortnite users even started believing that Fortnite is officially collaborating with the web browser Google Chrome and they are all excited for the collab between Fortnite x Google Chrome browser.

And some are so wise that it’s just a Fortnite game’s next chemical element, Chrome which is all set to start from Fortnite Chapter 3 Season 4, the Fortnite’s next chapter is also slated to commence from this Sunday in a grand manner, hopefully, Epic Games now clear the air amongst the Fortnite gamers for this chrome collab confusions.

Fortnite x Google Chrome – Will it Happen in the Future? 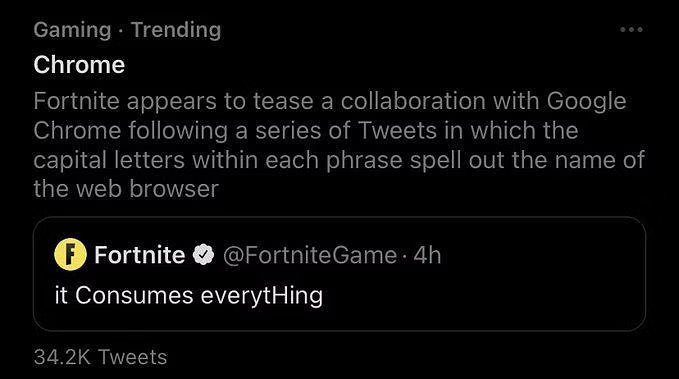 One just can’t necessarily confirm the same that google chrome and Fortnite will collab, but with the gigantic collaborations of Epic Games and Fortnite ever since 2022, there are all probabilities and possibilities that Fortnite x Google Chrome crossover event combo may occur too.

Also, some trolls and memes regarding the Google Chrome x Fortnite have been shared by netizens, and some are even mocking that Fortnite’s next collab is with Amazon and Flipkart, get ready for Fortnite’s e-commerce Collaborations in the future.

So, what we conclude is that the Chrome term for Fortnite is absolutely about the new chemical element for Fortnite’s next season from Sunday, also more leaks for Fortnite Chapter 3 Season 4 which is also Marvel season are coming.

Don’t fall prey to any of the Google Chrome and Fortnite Collab news for now, as they are completely baseless rumors on Twitter by some netizens, it ever Fortnite x Google Chrome collab happens, we are sure to update you with the same.

But in Fortnite Chapter 3 Season 4 many Marvel and Breaking Bad collab is going to occur which is going to storm and stun the entire Fortnite and other gaming clubs too.

Chrome will consume all, Chrome will be all. #FortniteParadise pic.twitter.com/MAKYIjrLmP

Let’s all wait for official leaks and updates for Fortnite Chapter 3 Season 4 which are sure to up the ante amongst all the Fortnite gamers and fans.

That’s all everything about this Fortnite x Google Chrome collaboration news and rumors, we are officially keeping a full stop that, no Fortnite & Google Chrome collab will occur, for now, stay tuned for more leaks about Fortnite chapter 3 season 4 as it’s gonna commence on soon.

Keep watching this space for more Fortnite exclusive news and updates, follow us regularly for all Esports and gaming updates exclusively, and drop your doubts in the comment box below.