Minecraft Mob Vote 2022 is going on next month. Mojang & Microsoft announced the return of Minecraft Live this week, and just like the occasions leading up to Minecraft Live 2022, we’ll once more have seen a community vote go live to choose which mob is introduced to the game next.

This week, Mojang stated that the upcoming Minecraft event will be held on October 15, however, this time Minecraft Mob Vote 2022, that community voting will be conducted in a slightly different manner than in the past.

The Minecraft Mob Vote 2022 start in this Minecraft event on October 15 at 12 p.m. ET, claimed Mojang. This event will inevitably contain upgrades for games apart from the core Minecraft experience since the game has expanded beyond it by this point.

When The Minecraft Mob Vote 2022 Will Start & What Changes Done In Voting? 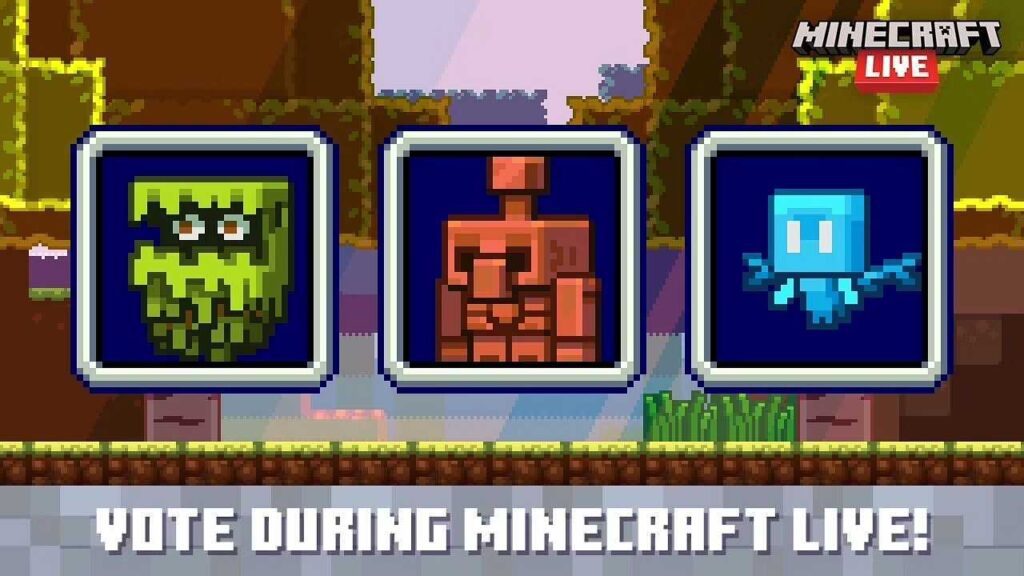 The community vote that determines the game’s next player-determined mob, however, is the big draw every year for those who are only interested in Minecraft itself because it allows users an opportunity to actively influence their personal Minecraft experience. Last year, a Twitter poll was used to decide whether to include the Allay.

This year, Mojang is making a change and intends to keep the findings a secret until they are made public at the event itself. We will be able to choose a new mob this year by Minecraft Mob Vote 2022, but we’re going to go about it a little different way this year, according to Mojang.

We may now vote on a special Bedrock server, through the Minecraft launcher, or right here on Minecraft.net instead of on Twitter. Minecraft Mob Vote 2022 begins on October 14 at noon EDT, giving us a full 24 hours to cast the ballot but still keeping the results completely a secret until they are revealed on-air.

How To Take Part In Minecraft Mob Vote 2022?

As we previously stated, the annual global Mob Vote mini-event takes place. And the occasion develops into a thrilling altercation among Minecraft enthusiasts. Players form entire communities and forums in an effort to enlist as many supporters as they can and, in turn, sway the results of the vote.

Everybody with a Twitter account could vote for one competitor in the Minecraft Mob Vote 2022 competition that took place the previous year on the social media platform. Glow Squid & Allay were declared the champions, and they were given permanent access to the game.

It will be even simpler than last year. When the game is launched, look to the right side of the entrance menu to participate in the Minecraft Mob Vote 2022. We may notice a small Minecraft Now button in the image above. The button will be dormant until August 25, 2022, and you’ll see a countdown clock instead.

When voting opens in 2022, users can choose the upcoming mob on the game’s launcher. The launcher will display the “Minecraft Live” button, and clicking it will display the choices that players can vote on.

To vote, simply select one of the alternatives. The winner is usually added and the solution in a subsequent patch when Mojang publishes the vote’s outcome around the end of the year.

A Minecraft community could only guess at the mobs that might be up for the Mob Vote in October at this time. The End dimension is reportedly the centerpiece of the version 1.20 upgrade, which may be announced during the live event this year.

Some gamers have begun to worry whether the mob candidates are connected to an alien dimension as a result of the rumors. With the exception of endermen, the Ender Dragon, and shulkers, the End is not heavily populated, therefore this would be a nice addition.

It’s also completely feasible that Mojang will release the 1.20 update with a new theme in mind. If so, the mobs that players view during the Mob Vote may not match their expectations. The choices for the 1.19 Wild Update were very different from what people were anticipating, thus this has happened before.

The Allay won the election that year and was featured in the Minecraft Live 2022 launch video. Although all of the enemies shown in the teaser were ones that previously existed in the game, this hasn’t prevented players from searching the clip for hints.

Players must merely wait and watch what transpires for the time being. Even as the big event draws nearer, Mojang should provide more details. Players didn’t want to miss next year’s Livestream event and all the celebrations it brings with a lot to look forward to.