How to Get Stormchaser Destiny 2: Easy Method

How to get stormchaser destiny 2:The video game Destiny 2 is continually changing. Destiny 2’s environment is constantly evolving with new mechanics brought on by new seasons, weaponry, and raids. The best DPS weapon, however, varies from season to season, and this season, Linear Fusion Rifles are the finest.

The Haunted Season in Destiny 2 saw the addition of many interesting new features. One of the best expansions was the new Duality Dungeon, which features some of the most interesting mythology. New to Destiny 2, the Stormchaser Linear Fusion Rifle is the first of its kind, thanks to its god roll and unique archetype combo in How to get stormchaser destiny 2.

The most recent Linear Fusion Rifle to be released with Season of the Haunted is Stormchaser. Unfortunately, the newest dungeon Duality can only be run with the Dungeon Pass, and the famed weapon drops from the second and final encounter. A brand-new Linear Fusion Rifle archetype within the Aggressive Frame category is called Stormchaser.

Stormchaser stands out because, in contrast to most Linear Fusion Rifles, it fires three shots at once, resulting in some of the highest damage yet seen in Destiny 2. Stormchaser needs access to the Duality dungeon to farm. Duality, the most recent jail in Destiny 2 to be released, requires a lot of strength.

Although the dungeon advises 1,550 Power, to begin with, the second and final encounter ramps up enemy power by 10 per encounter. Thus, a character with a power level of at least 1,560 is advised to be able to gain Stormchaser.

Only The Vault and Calus’s Greatest Shame encounters can yield Stormchaser, which can then be repurchased from the hidden chests. The first hidden chest is concealed within a doorway along a wall in the area with the four statues of the Cabal. Under the white structure in Calus’ vault, close to the tenth Repressed Memory location, is an opening leading to the second hidden chest.

How to Get Stormchaser Destiny 2: Destiny 2’s Best Stromchaser Perks 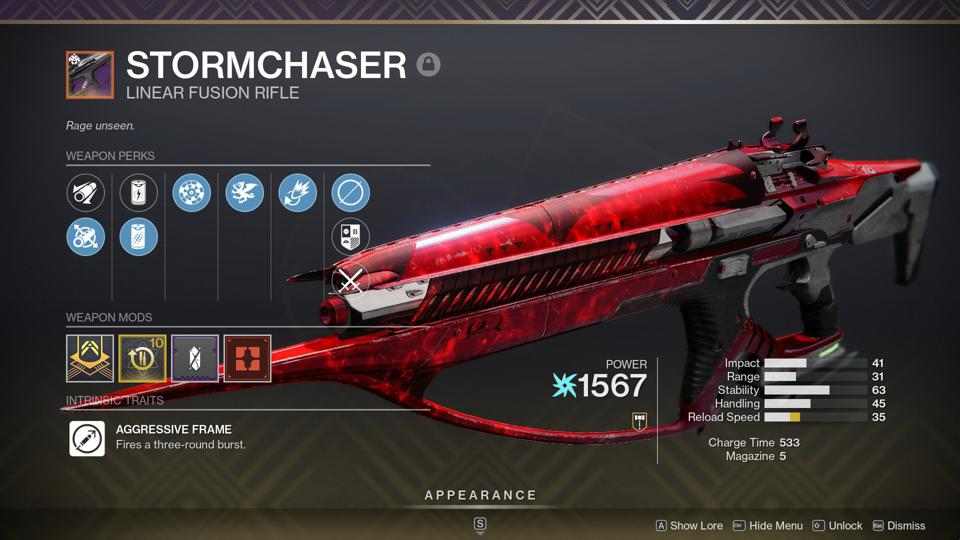 Stormchaser causes significant damage during its three-round burst, enabling it to body-shot opponent Guardians to victory in PvP. The best barrels for Stormchaser, like other Linear Fusion Rifles, are the Arrowhead Brake, Corkscrew Rifling, Hammer-Forged Rifling, and Fluted Barrel.

However, Guardians could prefer Extended Barrel or Smallbore for PvE activities because of the advantages of range and stability. Particle Repeaters and Projection Fuse are better suitable for PvP activities, whereas Enhanced Battery and Ionized Battery are better suited for PvE. However, the best universal battery perks for Vanguard, Crucible, and Gambit in Destiny 2 are Accelerated Coils and Liquid Coils.

It’s a rare weapon called the Stormchaser, and many players consider it to be the best linear fusion rifle available right now. It includes an archetype called the Aggressive Frame. Compared to other Linear Fusion Rifles in Destiny 2, the Stormchaser may deliver higher damage with this archetype because it can unleash a three-round burst.

Previous article
How to Go Shirtless in NBA 2k22: Steps To Take Off Your Shirts
Next article
Easy Steps to Fix Valorant Error Code 57 & Vanguard Not Initialized!